As a design build company we offer a one-stop shop overseeing a project from start to finish. With one company working with you, there is a clear understanding of accountability and shared goals throughout every phase of the project’s planning and construction.

We care about doing our best work, and providing our clients with the best possible outcomes. We’re accredited Master Builders & Renovators and have been recognized by the Home Builders’ Association with more than 10 RenoMark gold awards.

On May 19, Hammerdown was honoured with four wins at the annual Manitoba Home Builders’ Association RenoMark Renovation Awards Gala, winning gold in: Whole Home, Bathroom and Kitchen categories for the Bailey Project, while the Urban Project won in the Kitchen category. 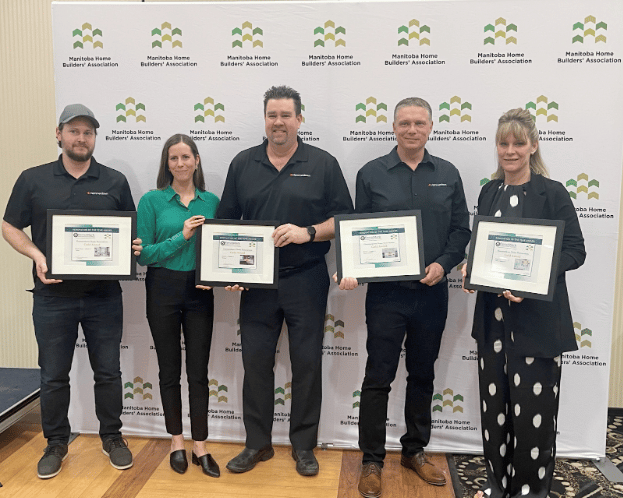 On May 19, Hammerdown was honoured with four wins at the annual Manitoba Home Builders’ Association RenoMark Renovation Awards Gala, winning gold in: Whole Home, Bathroom and Kitchen categories for the Bailey Project, while the Urban Project won in the Kitchen category.

The RenoMark Awards are granted by the Manitoba Home Builders’ Association (MHBA) which is a non-profit trade association. Judges evaluated each entry which consisted of before and after photos, blueprints and drawings, and a detailed description of the work done.

The client of the Bailey Project, which won in several categories, hired Hammerdown to renovate the kitchen, bed and bath, and the laundry room. Hammerdown owner and Master Renovator, Tyson Hiebert, explained a little bit about how they work, and why it’s important to start out on the right foot:

“Generally speaking, homeowners know what they don’t like,” says Tyson. “Some of them may have trouble visualizing things, so we try to take the anxiety out of it right at the design stage by presenting them with various styles. But we’re very careful to stay within budget. Also, from the first meeting with the client, it’s important to talk about their return on investment.”

Once they concluded the meetings, the team got to work on the project and managed to preserve structural integrity while greatly improving flow and sightlines, all to accommodate a family who are accustomed to having large numbers of guests, even hosting performances by local musicians. The team managed to reconfigure the living and kitchen areas to the point where there was plenty of room to install new cabinetry. Later on, it was clear that the level of finish in the rest of the house was going to have to extend to the  laundry room. “We spruced it up,” confirms Tyson. “In fact the client insisted on it!”

In fact, how the client settled on Hammerdown is almost a story in itself. It seems the client’s dog, Bailey, “chose” them.

“We were told this dog does not normally like males, but she was friendly with me from the first meet,” marvels Tyson. “The client was blown away and said, there you go, the dog has chosen you! So we were off to a good start!”

A good start, leading to a great finish—three awards for this spectacular renovation from the MHBA. And still, Hammerdown wasn’t done on awards night. They took home a fourth win, this one for the kitchen in the Urban Project.

Tyson says the Urban Project, which focused on increased storage and functionality within a specific budget, succeeded because of having exceptionally good communication with the client.

“Communication was key. We presented options, different floor plans with different budgets, and while it changed from their original intent, they were head-over-heels happy with the result,” says Tyson. “We like to focus on getting the fundamentals right; good communication, a clean work space, air filters, job sites swept up and vacuumed. I don’t know how to work any other way.”

This method of working, and certainly the subsequent awards, would seem to confirm the effectiveness of Hammerdown’s philosophy: “I put clients first. I deliver beyond the expected. I instill confidence.”

Learn more about these many other fine Hammerdown projects: here